In the 18th and 19th centuries, the area around Bollnäs became relatively prosperous among the local farmers, partly as a result of flax cultivation and mechanical flax processing plants. This income led to the flourishing of an unusually rich common culture, which was expressed in unusually large and magnificent farms with colourful interiors. The farmhouses often had several storeys, the farm buildings were well proportioned and in many cases separate houses were built for feasts and celebrations. This cultural heritage is so unique and well preserved that in 2012 it was inscribed on the UNESCO World Heritage List.

From Bollnäs, three of the seven World Heritage-listed health farms are within easy driving distance, as are several other interesting farm environments and cultural monuments related to flax processing. Below is a suggested tour of some of the area's main cultural and historical attractions. The tour is planned to be done by car and will take two to four days depending on the time spent at the sites.

First travel east from Bollnäs, to Västerby klungby (Rengsjö village). The village, which is managed by the Rengsjö local history society, displays a large number of buildings and period objects from the old farming community. The crown jewel is the Regnellshusen health farm, where the hand-painted wallpaper and the manor house's ingenious fireplace are hard not to admire. The collection of old textiles with hand-woven and hand-embroidered designs also draws the eye. In one of the buildings there is an exhibition about the nature photographer Hilding Mickelsson, who lived in the village all his life and depicted its wildlife with his camera.

Today, the village is kept alive by local enthusiasts and is very active. Guided tours are offered in the summer and the old bakery bakes Rengsjötunn bread according to a secret recipe. On special days, "In Great Grandma's Time" is organised, where children have the opportunity to try out popular activities linked to farm life in the past.

A few minutes' drive from Rengsjö will then take you to the ancient Växbo mill. The water-powered mill was built in 1869 and was a toll mill, where farmers paid customs to grind grain. The mill was closed in 1950, but it has been preserved as a cultural monument. For those who need a break, there is now the opportunity to have a coffee or a bite to eat in the peaceful setting by the water.

At Växbo you pass Sweden's longest shingle ridge, Uppsalaåsen. The water has cut through the ridge, creating the scenic Trolldalen occurred. At the bottom of the valley meanders the Växboån, which for centuries has provided power for various water-powered works. Even today, there are plenty of remains that give visitors an idea of how farmers used water power to grind flour and prepare flax. Many of the farms in the area had their own flax sheds next to the buildings required for flax processing. Among the more unusual cultural monuments are a water-powered flap and a linen drying shed with a preserved fireplace.

If you want to see how the local linen tradition lives on, make a detour to Växbo linen, where the flax is processed and woven into fabrics in a modern industrial environment. Visitors can take part in the linen weaving on their own or book a guided tour.

Then continue north, to the Hans-Anders health farm. The farm is popularly known as The wooden castle and it certainly lives up to its name. The manor house is very large and the interior decorations are reminiscent of a French Renaissance castle rather than a Swedish farmhouse. The decorative painting was probably done by the all-purpose painter Jonas Wallström, who decorated several farms in the area.

Both inside and out, the farm has remained largely unchanged for more than a hundred years. In the summer, the main courtyard houses a café and some of the rooms are used for art and craft exhibitions, which has made Träslottet a popular visitor destination.

Within walking distance are Arbrå ancient home, run by Arbrå hembygds- och fornminnesförening. In total, the association manages 15 buildings from the 18th century onwards, where it exhibits furniture, household utensils and working tools from the area. In one of the buildings there is an exhibition about the famous "Delsbostintan" Ida Gawell, whose lively performances of folk songs and greetings stories made her widely known and allowed her to travel to the USA to perform.

Then drive north to health farm Gästgivars in Vallsta, which is one of the farms that have been granted World Heritage status. Here you will find sumptuous wall paintings and the original model for one of Sweden's best-selling wallpaper patterns, the Gästgivar tapestry. In earlier centuries, as the name suggests, an inn was run on the farm. The tradition is carried on today in the form of a restaurant with a focus on local cuisine.

A short drive back south takes you to the small village of Alfta, home to two of the World Heritage-listed health farms. The owners of Pallars hälsingegård has chosen a low-key profile, but it is possible to see the farm by appointment. The magnificent buildings can otherwise be glimpsed in the distance from the adjacent road.

Nearby is the largest World Heritage Site,  Jon-Lars hälsingegård, which is one of the most worth seeing. The reason for its monumental size is that two brothers had it built together for their respective families. They each lived in one half of the house, which is evident from the different styles of interior design.

Owner Håkan Johansson, whose family has lived on the farm for several generations, offers personal and entertaining tours by reservation. The intact murals from the 19th century are absolutely stunning.

For those who have not yet had their fill of the colourful and exuberant cultural heritage of the time of the wealthy farmers, there is the opportunity to continue their journey of discovery to the nearby health farms Ol-Anders and Löka. Both are open to visitors and offer tours during the summer. It may also be time well spent to set aside a few extra days to explore other parts of Hälsingland's rich cultural heritage. Along the coast, beautiful medieval churches line up like a string of pearls, interspersed with charming fishing villages and ancient monuments from the Iron Age. A summer trip to Hälsingland is likely to be an unforgettable experience.

Footnote: We live in a time when recommendations for travel and arrangements are changing rapidly. It is always safest to check for up-to-date information regarding opening hours and availability when planning a trip.

Information has also been gathered during site visits to the destinations. 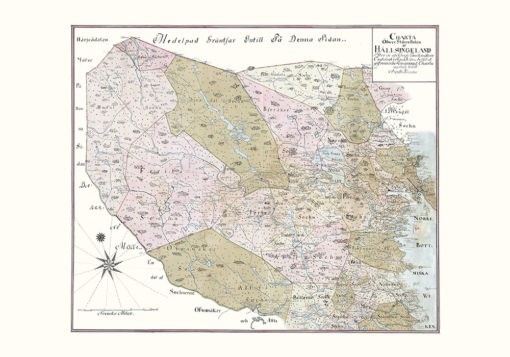 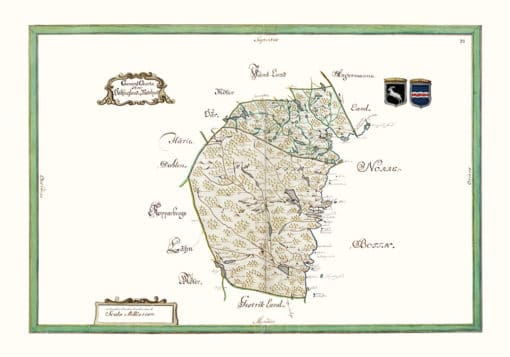 Reprint of historical map of Hälsingland and Medelpad from the 17th century.