Fabian Månsson speaks on Swedish Flag Day, 6 June 1936 at the stadium in Stockholm

Now we must hold together and guard what we have of both material and spiritual good.

These are good days for peace breakers and burglars. They have not only got new weapons, they have got new rights. Burglary has become "the pursuit of their most sacred interests".

Attacking other peoples or at least acquiring the necessary raw materials has become "a sacred mission". It used to be called wood theft. For us in Sweden, injustice is still injustice - but I cannot deny that it has not always been so. States have their rogue years.

But for 130 years it has been a flag of peace, a symbol of excellence in the world.

Now we work under it on the earth, on the sea, in the forest, in the factory, earning our bread by honest labour.

This can be troubling enough without creating other concerns. But our trade is still going well, the products of our labour are sold in distant countries. It sounds strange, when world trade is almost over and is in any case down to a third of 1929.

But we work well and conscientiously and our work is gaining recognition.

In the countries of the North we are free from the superstition that comes with necessity and that is rampant in other countries.

For us, the flag is a symbol of peace. The peoples of the North are well governed and built on ancient peasant foundations. We have no need of any new doctrines. We have no need of autocracy according to the doctrine that the head of state is great who can declare war out of his own power without consulting those who will make war.

We have also had periods of absolute monarchy, but never the serfdom which began to spread in Europe at the end of the 15th century. The new doctrines are not for serfs, for the serfs were a fairly independent people, and eventually they were enthroned above their masters in most countries.

Nor is it a doctrine for slaves, for even slaves knew what they wanted and had a will of their own, though they were more dependent than slaves.

It is a doctrine for the economically desperate, for those who live like rats in a church and have nothing to eat without eating each other. Only those who know no more counsel can preach that one can let go of freedom and walk in self-imposed bondage. We work under our common symbol, the flag of the kingdom, and expect the world to recover both materially and spiritually.

We don't want to plunder others, we want to help them with what we can, we want to live in peace around our flag in any case. 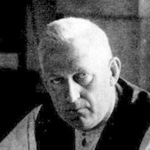 Fabian Månsson was a libertarian left-wing social democratic politician, newspaper editor and writer. Worked as a roughneck and errand boy until conscription. From 1899 he was a newspaperman, writing political columns in southern Swedish newspapers. Månsson... Show everything from Fabian Månsson