Viktor Rydberg (1828-1895) wrote The God Saga of the Fathers as a summary of his research into Norse mythology, our God Saga, an impressive research effort that took up almost ten years of his life.

"Hear the deep sounds of the North
Baldershage of childhood,
Kämpeluren, Heimdallshornet,
The sound of the silver harp at Brage!
Listen, it's the lullaby of the norn
Because it is in the ear of the people,
And a Nordic youth cluster
Yet I am glad to hear it!"

Viktor Rydberg (1828-1895) wrote The God Saga of the Fathers as a summary of his research into Norse mythology, our God Saga, an impressive research effort that took up almost ten years of his life.

Rydberg was one of Sweden's most important writers in the late 19th century, between Almqvist and Strindberg. Rydberg is also known for the poem The Star of Bethlehem, which begins with the familiar words "Shine over lake and shore”.

In the e-text, the following changes have been made to the original:

For the first time, the myths of our tribe are now handed over to Swedish youth as a coherent whole. A closer examination has shown that they formed a continuous saga, in which each myth, even if it was independent in its origin, was incorporated as a link in a chain, which begins with the rise of the world, the gods and the human race and ends with Ragnarök and the renewal of the world.

These ultimate links of the chain are connected by the myths of the ages of the world, of the ancestors and the events that timed their days. The first human race and the next of kin after it live in an age of cultureless innocence and peace. One of the vanagudar was sent to Midgard in human form to teach the people. He becomes the first priest and teacher of the Germanic people. He was succeeded by the first judge (Sköld-Borgar), and the latter by the first king (Halfdan-Mannus). His three sons again became the first tribal kings of the Germanic peoples, now divided into three branches. With their fates the mythical prehistory ends, but to be continued in heroic poems about their descendants, which poems end in the actual history.

All mythologies which include stories of the ancestors have placed them in close connection with the gods. The sacred powers of heaven and of the underworld protect creation and mankind, their wards, against hostile beings, and, in intercourse with the ancestors, control the course of events. Thus the more important mythical events necessarily take on a chronological order, just as such an order necessarily prevails in the story of the successive ancestors. The deeds and destinies of the gods under the rule of Shield-Borg must have preceded their deeds and destinies under Halfdan, and these again before those which occurred in the days of Halfdan's sons. In like manner the Indian Aryans have distinguished the events in the world of gods and men which took place before, during, and after the lifetime of their forefathers Manus and Brigus; the Iranian Aryans have distinguished them in the time of the primeval patriarch Jima and in that of the succeeding patriarchs; the Hellenic Aryans remember them in the Golden Age under the rule of Cronus, those in the Silver Age, when the world-spirit passes to Zeus, and those in the Copper and Iron Ages, as well as again within the latter the mythical events of the ages of Kadmos and Jason, and those which follow each other until the Trojan War. When Ovid wished to sing of all the transformations mentioned in ancient mythology, he could do so in chronological order, beginning with Chaos and ending with Caesar.

Above all, where a people is in possession of sacred tales, inherited from generation to generation, these gradually and as of themselves coalesce, owing to the need of the imagination for order and coherence. It does not require a high education for this process to take place. In Finns and Bulgarians, as well as in Aryans, heir tales have been linked together in epic chains. It does not require a developed culture in the modern sense of the word, for religious and moral notions of surprising grandeur to appear in the mythical tales of a people alongside notions which seem to us childish. It is an ethnological experience of various races, of Minke and Indian as well as of Rigveda and Germanic, and should least surprise us in the case of the latter, whose pagan culture was a poetic one. It is a fact that the highest and best of their past was expressed in their poetic art, especially in the religious one. It need hardly be added that the religion of a people, when it has not become obsolete, stands higher than the mass of the adherents of that religion, because it reflects the more ideal side of the people's life.

The Germanic myths are of very different ages. Some of the ones given here date, as the comparative examination of the myths will prove, from the Fornaran period. Among them are the myths of a clash between the gods and the naturalists, of a resulting fimbulatory winter, and of measures taken to save from it what creation had best for a coming blissful age of the world. Other myths belong to a much later period, some possibly to the last centuries of paganism. But as they have arisen, they have been added as new links to the epic chain already at hand.

With regard to the reasons and proofs for the correctness of the account I here give of the epic of our mythology, I have to refer to the "Investigations into Germanic Mythology," the first part of which appeared in 1886, and the second part of which is in preparation. 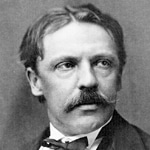 Viktor Rydberg was a Swedish writer, bard, journalist, linguist, philosopher of religion, translator and cultural historian. Rydberg was one of Sweden's most important writers in the late 19th century, between Carl Jonas Love Almqvist and... Show everything from Viktor Rydberg