The time of year has come when the Swedish press is trying to do a little soul-searching, which the thought of the turn of the year so unintentionally gives rise to. It is less a mood of the eternal flight of the ages, of the infinite space of the winter night, that seeks expression in the newspapers' observations before the turn of the year than a wistful hope for the annual subscription. It is the thought of it that will make newspapers praise their own excellence. It is generally assumed that the favourable readership has not itself noticed how independent, upright, fearless and talented the paper has been. Therefore, all these perfections are pointed out, while a pledge is made that the paper will, if possible, be even more excellent next year. "It boasts terribly like drunken knights and satiated priests," and one gets a sense of how well and neatly everything is written. Well, there's no harm in it. The matter is taken no more seriously than the self-praise which the complainants in the academic promotions let spread its scent among the public. These boastful knights and priests - we mean the subscribers - are not to be feared "to bring mischief throughout the land".

There is another side to the matter, which is perhaps worth a moment's thought. It is the position of the press on the political parties. We are so fortunate in this country - let this collective boast be justified by its truth - that the press is honest, in the sense that it is not false. There is no minute trade in opinions. Our circumstances are too small and transparent for such a thing to happen. That a change of ownership may lead to a change of attitude is quite another matter. Of course, there can also be mischief on such occasions, but it is an honest thing in itself if a person or an association sets up or takes over an existing newspaper in order to acquire a mouthpiece for opinions and concerns that are close to their hearts. It is also perfectly proper that the various parties competing in the political arena should have their advocates in the press. A government, however, always needs a body to speak for it in the public exchange of opinion. The actions of parties and governments must always be exposed and defended before the public. Misconceptions, not least malicious interpretations and deliberate distortions, need to be addressed. Even where the principals of these newspapers have committed stupidities, and perhaps especially then, the assistance of a press lawyer is called for.

On the other hand, it is of course unfortunate if the entire press of the country is divided along party lines in such a way that each newspaper places itself at the service of a particular party, speaks for it and acts as its advocate. It cannot be denied that this danger exists. The undisguised astonishment reflected in the columns which the newspapers devote to the reporting of each other's cleverness when they come across a statement which cannot be classified according to the natural system of party theory, shows the point we have now reached. The comments on such a partisan expression of opinion often take the form of confused reflections on the general dissatisfaction expressed by the honoured contemporary. No party is good enough. This looseness, as inexplicable as it is reprehensible, must be duly rebuked. It is assumed that every newspaper must belong to some party fold.

Now, in this context, one must leave aside the social democratic press. It is always party-affiliated and has the task of wet and dry advocacy and agitation for the collective opinion of the party. Those who preach from these lecterns must beware of bringing misconceptions to the fore. They are under stricter obligations to pure doctrine than the Church maintains towards its servants. The Church is old and frail, and has to put up with much that she would not have put up with in the days of her power. The Socialist Church maintains stricter discipline. It therefore makes an impression which is not intended when Social Democratic writers take a stand against clergymen because they are obliged to hold a certain opinion for the sake of their livelihood. The Social-Democratic pressman who does not stick to his party would soon have to find another farm to play on. In the service of the Social Democracy, the press is exclusively an instrument for the propagation of party opinions and for the glorification of the party leadership. It must advocate and it advocates. In this respect it is playing fair.

The bourgeois press - when it is not serving as a party or government organ - has a wider task. In our day, when, thanks to our unfortunate electoral system, the parties are so much given over to bickering and camaraderie, the press has to enforce a greater regard for the public and a greater respect for objectivity than the closed party organizations have any preference for. Parliament, too, has tended to behave like a closed corporation. Its bureaucratic spirit is conspicuous. There is a tendency to be self-sufficient that is not happy. It is far more important that criticism should be kept awake to its doings and to those of the parties than that public opinion should only bring to life the advocacy of the party organs for their respective peasants.

The task of a newspaper is not to advocate one party or another. It is most unfortunate when the press takes its task in this way. The democratic system of society is so full of weaknesses that constant criticism is necessary if it is not to degenerate. A press bound by party considerations cannot exercise this criticism. It cannot "call a cat a cat and Rollin a scoundrel". However inferior a party candidate may be, he must be commended. No matter how unabashedly a party parasitizes at the expense of the public, its actions must be praised as the forerunners of unselfish public spirit and statesmanlike concern. This partisanship places itself directly in the service of neglect.

To a certain extent, the press has the same duty of scrutiny imposed upon it in the sphere of state life as it has in that of art and literature. A bad theatrical performance must be judged as bad. Criticism should not be merely negative. But it must not falsify the measurements and views. It is just as stupid to say to the person who makes a justified complaint against a party measure or a candidate nomination, do better yourself, bring about a change within the party, as to say to the art critic who condemns a painting: yes, it is true that the painting is bad, but paint a better one yourself, you will see how easy it is. Nor is a justified criticism, which indicates where the wrong lies, merely negative. On the other hand, criticism that advocates and tries to instil distorted perceptions in the public is demolishing. A newspaper which is in league with a party is always tempted to this error of judgment. It is therefore never really fortunate that the person responsible for a newspaper's stance belongs to the ruling circles of a party association. It is undesirable that newspaper editors should have a greater share of seats in Parliament. Their activities in the press are too easily geared to confusing rather than enlightening the public. Exceptions to this rule are, of course, given, but the soundness of the rule should be unassailable.

The independence of the press is so extraordinarily important because public opinion and the moral pressure it exerts are the only thing that can prevent the decay of our social relations. The popular mind tempts to nerdiness and all kinds of demagogy. One democratic society after another has perished in this swamp. If our people are not to go down the same road, there must be unceasing vigilance and an unceasing struggle against its evils. We must not put up with the half-heartedness of our public relations. We must not overlook stupidity. It is the duty of the press to use correct measures, to let the spotlight shine on the nooks and crannies into which all manner of ambiguity and skullduggery seeks, and to judge without bias. This task cannot be performed by a partisan press. To do it, it must be independent and impartial. 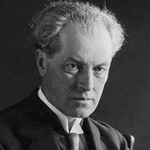