There was a time it lived in the North
a great nation, ready for peace and war.
Then, no one's slave and no one's master become,
each farmer was a man apart.
With the sword he cleared violence, with the plough the earth,
with peace for God and man he walked his path.
Himself his shield, he knew others protect,
and the sons of kings grew in his hut.

To him not from far-off shores
with the ships flowed strange needs.
The creature did not suck the must out of his loins,
not the abundance of the flint his profit begrov.
But he ploughed the field with his own hands,
His trust was his arm, his treasure was his court.
Our art to enjoy is, his was umbeer,
and being himself enough, was all his doctrine.

If he were not practised to speak gently,
his handshake was more than oath and writing.
He didn't hold a grudge under the slippery slope:
His hand was sword, but not his tongue poison.
He did not understand with words a debt pay
and speak of the tender drift of his heart.
His hatred was fire, his friendship was dying,
and with his foster brother he shared destinies.

His learning was not great. He knew how to suffer
and live like a man. What else do we know?
We know how the sun and stars move;
the over weaklings go up and down.
We monkey thunder, able to forge weapons,
but not the courage that smiles against danger.
For happiness creeping we fight for bread;
he stood upright and wrestled with fate.

And if he fell - he was not heard to whimper,
he tolerantly drew what law man had received.
With a vain sigh he bade the plague not bite,
he did not beg for life's miserable lot.
With the courage to obey and to fight,
he bore a steel breast against the shot of fortune.
All things can its whim consume and all things prune,
not power to live free and die with honour.

Of these virtues before Manhem was mentioned,
for it was the fatherland of male virtue.
At the mere name of weakness was ashamed
and blushingly thought of his own shame.
Here, where from the rocks the iron was tame,
she was founded, the eternally free settlement;
and when the people seem to leave,
then came the sons of the north to avenge them.

That was the thinking in our fathers' days.
You are gone, time of virtue and power!
What more, if the lesson of Germany pleases us,
and Gaul clothes us with lust and splendour,
and India's spice our dishes laws,
if as many bands they put on us?
What more, if a thousand treasures to us vault,
and we own all and not ourselves?

And the son of the North, Europe, gathers
and feel everything, but not to be free;
of light not see, of wisdom not know,
until lust and power become his masters,
and then his fragile happiness finally falls,
than weakly raises the cry of hopelessness,
than defiantly want to pay homage to fate
and speaks loudly of the glory of his fathers!

A slave is he whom evil desires pursue,
if the chain never rattled around his foot.
Only it is virtue, to act and tolerate
with simplicity and with strength and without knot.
There is only one wisdom - to receive
with calm his lot regardless of the threat of fate.
You vainly seek it around the wide earth,
if in thy breast it is not laid down.

On victorious lands the Swede steps,
where mountains and forests speak of ancient history.
He calls you, the song that the storm quails
around the ashes of fighters, deep in the pile:
you can forget your great fathers
and sometimes their shadows stand concealed?
Step then with their lineage and their customs
also the power of the North in the grave?

No, renom it, the temple of the former virtues,
for eternity remained on this earth!
Is she not with nature's own stamp
to the strong abode of manhood made?
Revive them, the ancient examples
of glory, power and faith in our North!
Then in our case we shall also take revenge
and the name of Manhem on earth be mentioned again. 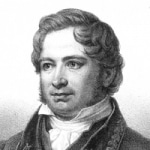 Erik Gustaf Geijer was a Swedish writer, poet, philosopher, historian and composer. He was one of the greatest aestheticians and innovators of the Swedish Romantic period. He is considered one of the... Show everything from Erik Gustaf Geijer