From the poem suite "Ett folk", first published in Svenska Dagbladet on 22 September 1899; later included in the collection Nya dikter from 1915.

And shouted three neighboring people: forget
the greatness you embedded in the earth!
I said, Rise, our dream of greatness
for supremacy in the North!
That dream of greatness still delights us
to play in new exploits.
Let up our graves, no, give us men
in research, in colours and writings!

Yes, give us a people on the brink of an emergency,
where a fool can break his neck.
My people, there are other things to carry in hand
than a full Egyptian stew.
That's better, that pot's breaking in half,
than that the living heart rusts;
and no man shall be more than thou,
that's the goal, whatever the cost.

It is better of an avenger reached
than to see the years fade away,
it is better that all our people perish
and farms and towns burn.
It is prouder to dare to roll the dice,
than fade away with the flame going out.
It is more pleasant to listen to a string, which broke,
than never to draw a bow.

I wake in the night, but around me is peace.
Only the waters storm and simmer.
I could throw myself down in longing
as a praying warrior of Judah.
I don't want to beg for sunny years,
about harvests of gold without end.
Merciful fate, light the lightning that strikes
a people with years of misery!

Yes, drive us together with scourges,
and bluest spring shall bud.
You smile, my people, but with stiff features,
and sing, but without hope.
You'd rather dance in silk wet
than suggest your own riddle.
My people, you shall awake to the deeds of youth
the night you can cry again.

Above all, may you rise, daughter of distress,
that shy your eye wants to cover.
So we love you, that were you dead,
our love would awaken you.
If the night becomes sleepless, if the camp becomes hard,
we will not fail you on that journey,
you people, you land, you language, which became ours,
you our breathing voice in the world. 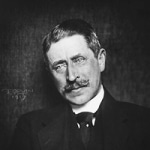 Verner von Heidenstam was a Swedish nobleman, author and poet. He was a member of the Swedish Academy 1912-1940 and was awarded the Nobel Prize in Literature in 1916. Albert Bonniers Publishers describes him as "our... Show everything from Verner von Heidenstam