On the isthmus Laughter at Ängsö castle, the lords of the castle used to "beat up those of their people who displeased them". In the name of the island lies "a mockery of the unfortunate peasants, who there gloated under the whip."

Laugh, Laughter or Skrattholmen is one of the small islets around the island of Ängsö (Formerly Engsö) in Västmanland, about 20 km southeast of Västerås, and is according to legend the place where the noble lords of Ängsö Castle brought peasants and peasants who had fallen into the disfavour of the lords to punish and torment them with cruel methods.

The opening quotes come from Historical-geographical and statistical dictionary of Sweden, sixth volume, 1865. But also Alfred Kämpe writes in The struggle for freedom of the Swedish Ommogens (buy your copy here!) about this dark history of Holmes:

By the above-mentioned immoderate bequests, which are characteristic of the reign of Christina, whereby the nobility was elevated to fabulous landed property, the kingdom was utterly impoverished. The arm of the law, moreover, was so crippled that the poor commoners, as we have also seen, were left without protection and defence in the hands of their lords. They were abused and routed in every possible way, as on Ängsön - whose holders possessed full farm rights - where the lords had their peasants, perhaps even long before this time, beaten on the islet, which afterwards, in mockery of the wails of the unfortunate, received the name of Laugh or Skrattholmen. The guardians had in 1638 acknowledged the neck and the right of action here.

Neck and hand rights which Kämpe mentions in passing, meant that the noblemen at Ängsö had the "right" to imprison, prosecute and punish their subjects at their own discretion. The right also included capital punishment and mutilation. In 1638, when the right to be beheaded and to hold hands was supposedly recognised at Ängsö Castle, the free lord Per Persson Sparre owner of the goods. Before him, the castle had been owned by, among others, the noble families Posse, Trolls and Oxenstierna.

Folklife Researcher Arvid August Afzelius also mentions Skrattholmen in his book Swenska Folkets Sagohäfder (1851), in which he argues that it is far from being an unusual story from this period. Peasant rape was more the rule than the exception, it seems. Afzelius tells how "their peasants were forcibly delivered to them, little else than as slaves, without the protection of the law; they could sentence them to flogging and other ignoble punishments, and in some places, such as Wisingsö and Ängsön, even from life and property."

Ängsö castle and estate were owned by the noble family Piper from 1710 until 1971. The Piper family still rents and lives on Ängsö today. The whole of Ängsö is now a nature reserve. The castle is open to the public during the summer and is owned since 1971 by The Westman Foundation.

Our wall maps are carefully restored, centuries-old maps that are reprinted in Ångermanland on matte, age-resistant, museum-quality premium paper.3% of the proceeds go directly back to our cultural heritage! 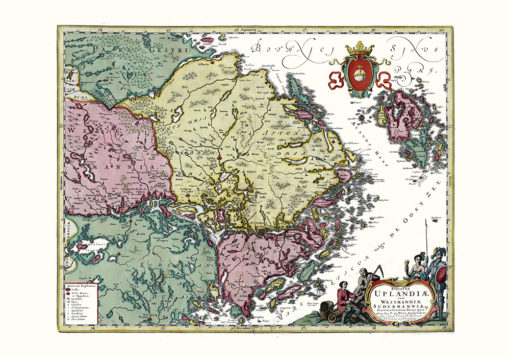 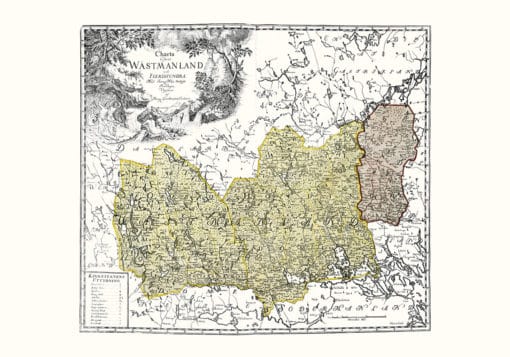 Reprint of historical map of Västmanland from the 18th century. 70×100 cm. 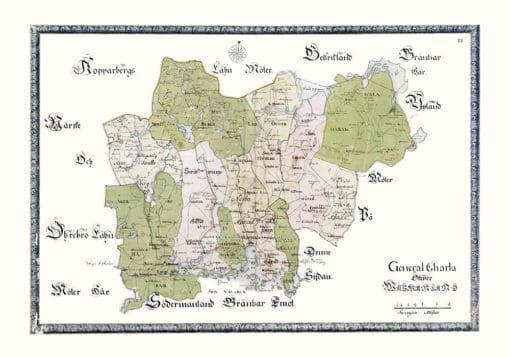 Reprint of historical map of Västmanland from the 17th century.