And now the lamp is out and now the night is silent and clear
and now all the memories of long lost days are rising
and gentle tales fly around like streaks in the blue
and wonderful and wistful and warm is the heart then.

The bright stars gaze down into the winter night's glow
as blissful a smile as if there were no death on earth.
Do you understand their silent language? I know a story yet
I have it learned from the stars and do you want to hear it?

They both lived on earth before and loved even then
but were separated by night and death and sorrow and sin too.
Then white wings grew fast on them in the peace of death
they were judged far apart on different stars stay.

But they thought of each other in the home of the blue heights.
immeasurable lay a space of glory and suns between them
countless worlds wonders of the Creator's wise hand
spread between Salami and Zulamit on fire.

For a thousand years they built with unwavering faith
and so the Milky Way was built a magnificent star bridge
that embraces the highest vault of heaven and the orbit of the zodiac
and binds together the shores of the ocean of space.

Horror gripped the cherubim to God rose their flight:
"O Lord, look what Salami and Zulamit have built!"
But God Almighty smiled and a bright light spread far and wide
"What love has built in my world I will not tear down."

And Salami and Zulamit when the bridge was finished
they leapt into each other's arms - and soon a star bright
the brightest on the vault of heaven ran up in their wake
that after a thousand years of mourning in bloom a heart beats.

And all that on the dark earth has loved tenderly and joyfully
and were separated by sin and sorrow and anguish and death and night
it only has the power to build itself from world to world a bridge
be sure it shall reach its love its longing shall find rest. 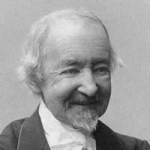 Zacharias Topelius was a Finnish-Swedish writer, historian, newspaperman and poet who belonged to an old Ostrobothnian family. Topelius first became known to his contemporaries as a lyricist in the Romantic style (Ljungblommoror I, 1845)... Show everything from Zacharias Topelius