The third and final volume of one of the few attempts to depict the many rebellions of the Swedish common people against the authorities.

The Freedom Struggles of the Swedish Allmog, by Alfred Kämpe, is a rare three-volume work that Vilhelm Moberg valued highly, and one of the few attempts to describe the many rebellions of the Swedish allmog against the authorities.

The third and final volume by The struggle for freedom of the Swedish Ommogens begins with the Gustavian era. Among other things, you will read about the King and the people. The peasants and the order of servants. Poverty and hunger. Brutal house searches and tax buying rights. Allmogere and unrest in Södermanland. Sending of messengers and military intervention. Aggregations and secret meetings. Allmog slaughter and great deeds. Salaries and food lists. Squatters and staters. Cleavage and separation of land.Emigration and the Age of Expences. The new century with the suffrage issue, socialism, pay statistics and trade unions.

Preface of the book

As the last and third part of this work is now placed before the eyes of the reader, the errors and imperfections which may occur must be heartily regretted, although earnest efforts have been made to present the migration of the common man through the centuries in as objective and clear a historical light as possible. But the material which has been made available - and by this is meant not only printed history, but also written treatises, minutes of trials and meetings, and other documents used - has generally been one-sidedly biased in favour of one party, that is, the upper class. Here the work has been made considerably more difficult. It has often required great efforts to find the thinking of the common man - rarely sufficiently explored or presented by the investigators concerned - in conflicts with society or the employers, the peasants as they are called.

Now, however, the account of the "Swedish Allmogens Struggles for Freedom" has reached beyond the limits of our days - the last chapter even takes up the events in the agricultural labour market last year - and thus the pen is closed. I dare not attribute any more value to my little attempt at historiography than that of being a most imperfect collection of material. But I do hope that more competent pens than mine, on the basis of this presentation, will continue the research in this field. 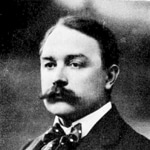 Johan Alfred Teodor Kämpe was a Swedish writer and newspaperman. Kämpe came from humble beginnings. His parents were tenant farmers on the Fyllingarum estate. He began working on the estate at an early age, as a herd boy... Show everything from Alfred Kämpe